One of the many remarkable feats of visual cognition is the ability to recognize objects despite changes in view. Whenever an object or an observer moves, the two-dimensional information that reaches the eye is altered, sometimes quite dramatically. Yet effective interaction with the environment requires accurate and efficient recognition of objects across changes in viewpoint. Somehow we must map the diverse two-dimensional images that reach our eyes onto a representation of the same external object. Animals also need to do this. Their survival may depend on the ability to quickly and accurately recognize sources of food, predators, mates, and spatial landmarks regardless of the direction from which they are seen. How do animals do this? Our research investigated processes of object recognition in pigeons, and specifically whether these processes are similar or different to those by which humans recognize objects across changes in view. Our investigations have used pictures of objects as well as real objects that are presented and rotated via a custom object-rotation apparatus. Recently we have investigated the role of motion in object recognition.

In order to survive, animals must be able remember and find important places, such as their home or sources of food and water. Scientists have identified several processes that animals use to find their way around. Our research focuses on use of visual landmarks and the geometry of surfaces for orientation and spatial search. The following are a few examples of our recent studies.

Use of landmark arrays to find a goal

Pigeons and humans both readily learn to find a goal that is hidden in the center of an array of landmarks. However they respond very differently if the array is expanded (landmarks spread farther apart): Human continue to search in the center suggesting the use of relative rule, whereas pigeons search at learned vectors from individual landmarks, suggesting that the absolute spatial information was encoded.

Use of geometry to determine heading in an enclosure

Cheng (1986) discovered that rats can orient (i,e., establish a directional frame of reference) by using the geometric shape of an enclosure. For example, if food is found in one corner of a rectangular enclosure, the rat will search both in the correct corner and the geometrically equivalent corner. Furthermore, this control by geometry is primary for rats and will dominate over control by features. Since then use of geometry has been shown in other species including human toddlers (Hermer & Spelke, 1994), young chickens (Valloritagara et al., 1990), and fish (Sovrano et al., 2002). Our research showed that pigeons also use geometry, that the relative control by geometry and features depends on initial experience, (Kelly, Spetch & Heth, 1998) and that geometric encoding by pigeons is based at least in part on relative metrics (Kelly & Spetch, 2001). More recently, we have shown overshadowing of geometry use by features in black-capped chickadees (Gray et al., 2005), and we have shown that rearing conditions influence the relative control by geometry and features in fish (Brown et al., 2007).

Searching for the center of an enclosed arena 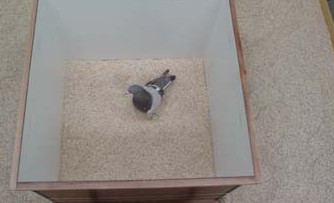 Young chickens can learn to find food that is hidden in the center of an enclosed arena, and if the arena is expanded they will search both in the center and at the trained absolute distance from walls. The substantial searching in the center on expansion tests contrasts with the lack of center searching shown by pigeons and other animals when landmark arrays are expanded. In recent studies we have tested pigeons to search for the center of an enclosure and our expansion test results are similar to those reported for chicks. It appears that pigeons encode spatial information from the surfaces of enclosures differently than from arrays of discrete landmarks. 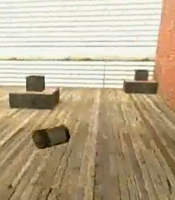 Considerable research has focused on the selection of cache sites in food-storing birds, and a few studies have investigated how children choose hiding locations. Surprisingly, little is known about the selection of hiding locations by adult humans. In a collaborative project between my lab and Vadim Bulitko’s lab in Computing Science, we are investigating how people hide and search for objects in real and virtual rooms. This project is designed to help understand the decision processes used by humans to select hiding and searching locations, as well as to develop better hiding/seeking scenarios for computer games.