Risky Choice in Pigeons and Humans 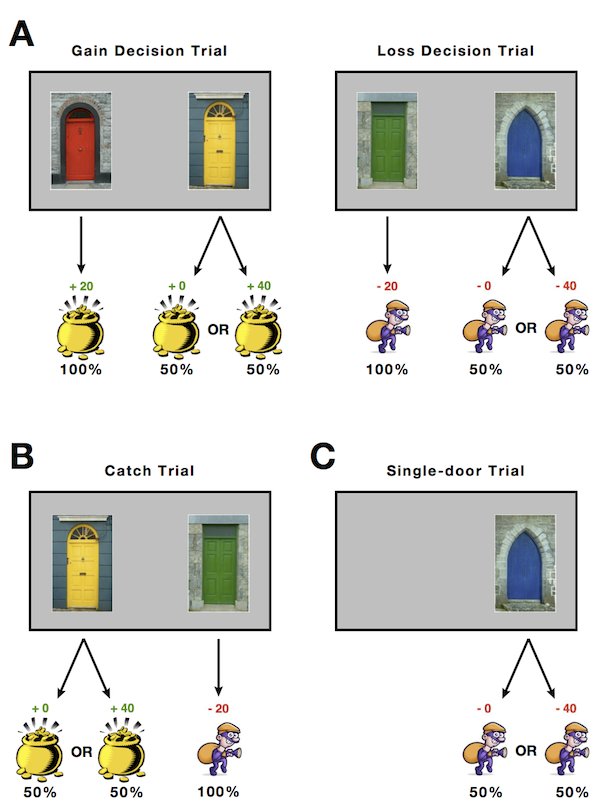 We are studying these types of risky choices using a task that requires our subjects to learn outcomes through experience. Typically our subjects, which include both humans and pigeons, have to make choice between a “safe” option and a “risky” option. The safe option will provide the subject with a sure win. For example, a person might receive a guarantee of 20 points each time they make a certain choice. Correspondingly, a pigeon might always receive 2 cups of food. The risky option presents the subject with a probabilistic outcome. It might, for instance give people a 50% chance of either winning 40 points or getting nothing. In a similar fashion, pigeons would receive a 50% chance of obtaining 4 cups of food or nothing at all. 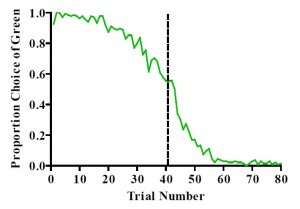 Cognitive flexibility is defined as the capacity to adapt one’s concept sets and behaviour dynamically to changes in the environment. In nonhuman animals, cognitive flexibility is most commonly studied using reversal tasks. In a typical reversal procedure, an animal is presented with two stimuli (e.g., green and red buttons) and learns that responding to one stimulus (green) is rewarded with food and responding to the other (red) is not; after acquiring this discrimination the contingencies are reversed so that responding to the previously-unrewarded stimulus (red) is rewarded, and responding to the previously-rewarded stimulus (green) no longer produces reward. With repeated reversals, a wide variety of species show decreased time to respond to the newly-correct stimulus, which is thought to be indicative of flexibility.

More recently, researchers have studied the ability of pigeons, rats, and humans to adapt to a reversal located in the middle of an experimental session. With several sessions of training, pigeons produce many anticipatory errors (responding to the red stimulus before it is correct) and perseverative errors (responding to the green stimulus after the reversal, when it is no longer correct) on visually-based midsession reversal tasks (see figure above). Where the degree of perseveration is normally used as a measure of cognitive flexibility, this novel procedure has actually induced pigeons to predict and anticipate the arrival of the reversal.

We have found that found that pigeons’ errors on this task are attributable to a failure to inhibit incorrect responses near the expected reversal, rather than necessarily being a deliberate ‘choice’ of the incorrect option. We are currently studying whether pigeons and chickadees can track reversals with unpredictable session structures. More generally, we are interested in how timing, rule-learning, and inhibition lead animals to anticipate changes rather than just reacting to them, and in turn how anticipation contributes to cognitive flexibility.